Sickle Cell Disease (SCD) is a collection of inherited red blood cell disorders. SCD is a disease of the blood and it affects the red blood cells primarily. Healthy red blood cells are round, and they move through small blood vessels to carry oxygen to all parts of the body. In people who suffer from sickle cell disease, the red blood cells become hard and sticky and look like a C-shaped farm tool called a sickle. Hence the term, “sickle” cell disease. The sickle cells die early, which causes a constant shortage of red blood cells. Also, when they travel through small blood vessels, they get stuck and clog the blood flow. This can cause pain and other serious problems such as infections, acute chest syndrome, and stroke. 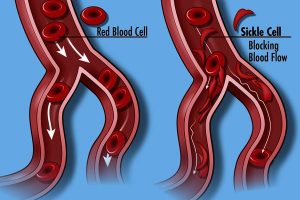 The most common form of SCD is sickle cell anemia (SCA). It results in an abnormality in the oxygen-carrying protein hemoglobin found in red blood cells. Typically, problems with sickle cell anemia begin to occur around 5 to 6 months of age. A number of health problems may develop, such as attacks of pain (“sickle cell crisis”), anemia, swelling in the hands and feet, bacterial infections and stroke. There are many more reason people use medical marijuana, click here for more information.

Sickle cell disease occurs when a person inherits two abnormal copies of the β-globin gene that makes hemoglobin, one from each parent. This gene occurs in chromosome 11. Several subtypes exist, depending on the exact mutation in each hemoglobin gene. An attack can be set off by temperature changes, stress, dehydration, and high altitude. A person with a single abnormal copy does not usually have symptoms and is said to have sickle cell trait. Such people are also referred to as carriers. Diagnosis is by a blood test, and some countries test all babies at birth for the disease. Diagnosis is also possible during pregnancy. Over 92% of patients says that medical marijuana works for there conditions.

Treatment for individuals that do have SCD may include infection prevention with vaccination and antibiotics. Also, high fluid intake, a regiment of folic acid supplementation, and pain medication are useful and have shown to be beneficial. Other measures may include blood transfusion and the medication hydroxycarbamide (hydroxyurea). A small percentage of people can be cured by a transplant of bone marrow cells.

The frequency of SCD varies from country to country. SCD affects 0.5 percent of the African American population in the United States (approximately 200,000 cases in the United States). It is also common in people of Hispanic descent, from India, Central America and the Arabian Peninsula, but can occur in people of any background. SCD affects approximately one in every 400-600 African American newborns. The sickle cell trait is present in approximately 40 percent of the general population in some areas of Africa. The incidence of sickle cell trait in Americans of African descent is close to 10 percent. If you are interested in getting started, contact our Florida approved medical marijuana doctors group to get started today.

A medical study conducted by the journal of Cannabis and Cannabinoid Research in 2018 shows that medical cannabis use is relatively common among patients with sickle cell disease. Statisticians at a University conducted an anonymous survey in 2018 among nearly 59 plus patients with the disease. They found that just over 40% of respondents reported having used cannabis within the past two years, and 31% reported having used it within the past month. Respondents of the survey said they did so for therapeutic purposes. Also, this survey found that cannabis “allowed for less use of pain medications”, a finding that is consistent with chronic pain sufferers.