According to Larry “Ratso” Sloman’s book, “Reefer Madness: A History of Marijuana,” the number 420 stems back to 1971 in San Rafael, California where a bunch of teenagers who called themselves the Waldos. The group told HuffPost about their quest for a secret weed garden that they claim sparked it all. 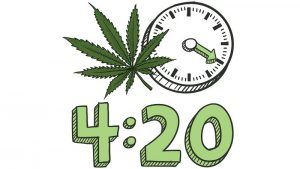 The most widely accepted origin story belongs to a group of San Rafael High School friends who called themselves the Waldos, as they often hung out by a wall outside of their school. They coined the term in 1971 to refer to their after-school trips in search of a mysterious treasure trove of marijuana planted by US Coast Guardsman Gary Newman growing somewhere in Point Reyes. Newman’s brother-in-law bequeathed the Waldos a treasure map, saying that the marijuana crop was theirs for the taking should they find it. The Waldos referred to the operation as “420 Louis,” a coded invitation to meet at 4:20 PM after sports practice at the statue of Louis Pasteur in front of campus. Eventually, the phrase was shortened to “420,” and even though they stopped looking for the mystery marijuana, the term stuck.

Steven Hager, as editor of High Times magazine, played a large part in heightening the 420 mythos when he published an article in May 1991, attributing the phrase to Grateful Dead followers and championing the use of 4:20 as the socially acceptable time for cannabis consumption and 4/20, or April 20th, as the day of celebration. On December 28, 1990, a group of “Deadheads” in Oakland handed out flyers at an Oakland Grateful Dead show, inviting people to smoke “420 on April 20th at 4:20 PM.” Hager received one of these flyers, eventually publishing it in the May 1991 issue, advancing the notion of 4/20 as a “stoner holiday.” In 1998, High Times acknowledged the Waldos as the “inventors” of 420. The Waldos have a website dedicated to their origin story, with videos and documented proof supporting their claims.

Despite looking for several weeks, they never uncovered the tantalizing supply of free dope, but they did coin a code they could use to conceal their drug use from their parents and teachers. It’s likely 420 would have died on the vine except that Waldo Dave’s older brother was a friend of Phil Lesh, bassist for the Grateful Dead. Learning the phrase from the patient zero Waldos group, Lesh and the Dead then co-opted the term and spent the next 35 years touring the globe, smoking weed and passively popularizing the association between the number 420 and the consumption of pot.

If you or a loved one is look for a medical marijuana card in Florida, look no further. www.edocmmj.com can help you get you cannabis card and doctor recommendation all in one short visit. Please visit our websites qualifying conditions page for more information on getting started. (800) 303-9916.