Packing up for a flight has always been a source for question marks. Complying with the rules and regulations enforced by the TSA can be stressful, especially for those non-frequent fliers who don’t understand all that fuss happening in front of the security gates. Add medical weed to the equation and you would probably need a lawyer to sort things out. Here’s what every medical marijuana patient needs to know before flying. 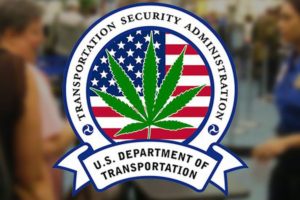 What not long ago seemed impossible is now a reality. Medical weed has become largely legal throughout almost the entire United States. 33 states and 4 U.S. territories have approved the use of cannabis for medical purposes, while 14 other states have somehow limited the use of medical weed by passing more restrictive laws in limiting THC content. A look at the increasingly green US map might encourage one to believe there is nothing to restrict bringing medical weed from one haven to another. However, it is more complicated than that.

While states passed legislation allowing the use of medical weed, marijuana is still classified as a Schedule I drug at a federal level. That pretty much puts it in the same category with heroin, LSD, and ecstasy, substances you most definitely don’t want the TSA workers fishing out of your backpack. Given that federal law always trumps state law and that airports fall under Federal jurisdiction, even when you’re traveling between two states that both permit marijuana use, you could encounter difficulties taking your stash with you.

As the law still dwells stranded between black and white, don’t expect the official stance taken by the TSA to be something other than a shade of gray. On their website medical weed appears as being permitted in both carry on bags and checked bags, but special instructions do apply. The same source can be cited for claiming that screening procedures are designed to detect potential threats to aviation and passengers and focused on security. In other words, they don’t (or at least shouldn’t) care about your medical weed, unless you packed a ridiculous amount. However, there is a catch. The TSA highlights the same discrepancy between state law and federal law when it comes with marijuana in general. Although not on a hunt for your medical weed, they won’t be shy into referring the matter to a law enforcement officer.

By default, TSA officers are required to flag and report any suspected violations to local, state or federal authorities. As you guessed, they won’t bother going all the way up, so they would probably stop at the bottom of the hierarchy – local police, which, as you already guessed, has its hands tied by the favorable laws on medical weed. Your biggest concern is probably not an orange uniform, but seeing your precious medical products taken away from you and thrown along other usual suspects that don’t make it on the plane – oversized toothpaste tubes, pocket knives, and lighters.

The bottom line is clear. While the medical weed you are carrying is not illegal, the TSA may still not want you to fly with it. And, as you already know, they are the kind of authority that doesn’t enjoy prolonged small talk, especially targeted at creating doubt around its decisions. As annoying as that might sound, that is both the worst-case scenario and the most probable scenario you will be encountering at the security screenings. However, there is an increasing number of reports coming from fliers who encountered absolutely no problem in boarding with medical weed on them.

The situation varies from one airport to another, as abiding contradictory laws leaves an open door for personal interpretations. Social media probably abounds in success stories of travelers who joyfully took their medical weed across state borders without evening thinking it might not be exactly legal. Click Here.

In the end, it is up to you to decide. If you are confident your medical prescription can get you past security, or hear of an overwhelming evidence suggesting your airport’s TSA keeps a blind eye, you should go ahead and take enough ratios to last you throughout your stay. However, if you dread the thought of spending more time at the screening, to risk losing not only your medical weed, but also your flight, go for the safer better of resupplying at your destination. Get Started.