Various studies, anecdotal reports, and scientific literature summaries have been reviewed to the best of the Physician’s ability. Given that the FDA will not approve medical marijuana or its extracts for traditional pharmaceutical use, we are obligated to share the warning that this therapy option is not a guarantee, and is not indicated as a cure, preventative measure, diagnostic tool, or means to mitigate a medical condition.  We must keep in mind that some studies are more subjective in comparisons; conclusions of “some benefit” may mean that while the study did not find it statistically significant, while others may still benefit.  The best type of study is a randomized clinical trial with humans, but research is banned basically in the US except for special programs; therefore, much data is brought from international sources, invitro or with animal research.

All this being said, with our philosophy to support a patient’s choice in a setting that minimizes risks/harms, we intend to educate based on the science available and provide recommendations.  As new data is revealed about the potential benefits of medical marijuana or the risk of side effects, the information below will be updated so that you and your physician can make the best healthcare decisions together.  Studies have primarily been done with patients having a terminal condition, and now we are realizing the benefits can also relate to other more common conditions, as long as the correct ratio of CBD and THC are used. Finally, while there is a  lot of evidence that medical marijuana can be help numerous conditions, we keep entertain the science with an open mind but will comply with the regulations foremost related to Amendment 2. 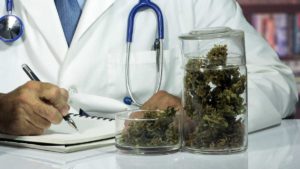 One of weed’s active ingredients, tetrahydrocannabinol, or THC, interacts with the brain’s reward system, the part primed to respond to things that make us feel good, like eating and sex.

When overexcited by drugs, the reward system creates feelings of euphoria. This is also why some studies have suggested that excessive marijuana use can be a problem for some people — the more often you trigger that euphoria, the less you may feel during other rewarding experiences.

Within a few minutes of inhaling marijuana, your heart rate can increase by between 20 and 50 beats a minute. This can last anywhere from 20 minutes to three hours, according to the National Institute on Drug Abuse.

If you or a loved one is interested in speaking with a All Natural Health MD – Marijuana Doctor in your area, please visit our website today.